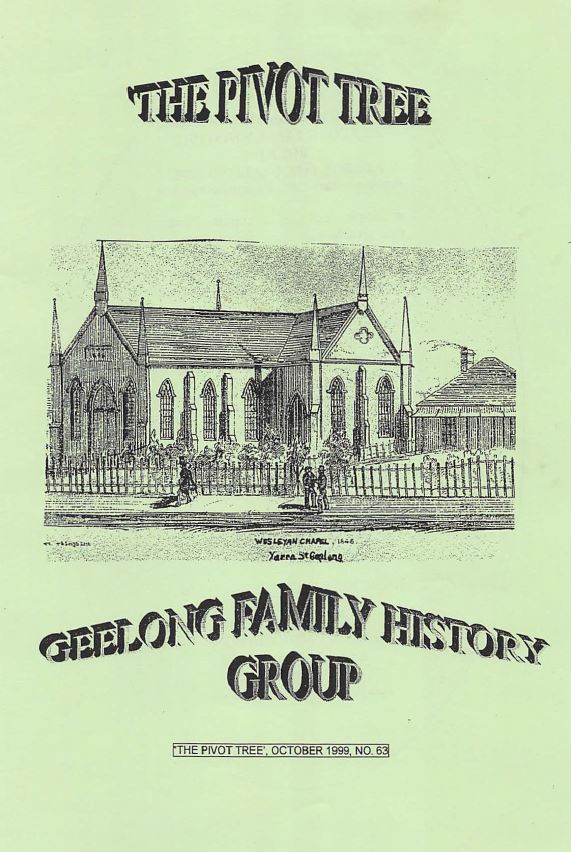 Appropriately this appeared on the back [last] page of Pivot Tree No. 63, October 1999 – it is reproduced in full here …

As this is the last page of ‘The Pivot Tree’ that I will edit I thought to tell you a little of the history of the newsletter / journal.

At my suggestion the Committee of 1983/84 gave me permission to write a newsletter which would be distributed to members and later for me to contact other groups offering to swap our newsletter with theirs.  So I sent other family history groups in Victoria, Interstate & U.K. copies of ‘The Pivot Tree’ and the majority decided to swap with us.

The Group which was then the Geelong Branch of the Genealogical Society of Victoria ran a competition to decide on a name for our newsletter.  ‘The Pivot Tree’ was chosen by a majority of the members as Geelong was known as the – ‘Pivot’ – because it was the central point for travelling to the Ballarat area goldfields and also the Bellarine Peninsula and the Western District.  In the latter half of the 19th Century Geelong’s port was a very busy one with steamers to Melbourne, grain and wool ships to overseas, interstate shipping from Tasmania and the other states.  Geelong was also the hub for road travellers to and from the above mentioned places.  The — ‘Tree — because it has roots & branches.  Joyce Newton [our then president was the winner of this competition].

When I first started to compile, copy, and distribute the newsletter I used to use a ‘Gestetner Duplicator’ at the local Neighbourhood Centre.  I usually ended with more ink on me than on the pages.  I used to do the typing on an old ‘Royal’ typewriter which you had to pound so that the letters would be complete.  I eventually bought myself a later model typewriters and then in 1986 I bought my first computer a ‘286’.  I thought I was made [I could edit and not have to retype the page].

Gradually the newsletter grew bigger until all the pages would fill up my large family sized table.  I would pick them up in order, staple, address envelopes etc.  Elaine L [Kranjc] and I were then carrying reams of paper to Melbourne on the train to make use of free photocopying at a museum where we were volunteers then carting the copies home to be sorted, stapled, addressed, sorted into postcodes and then taken to be mailed.

Later on one of my daughters, Tricia, bought a better computer and I had full use of it.  Lois Nelson took on distributing the Journal, so I only had to compile & edit it as well as write articles etc.  Other members of the Committee took on the task of delivering & collecting the copies from the Gordon’ Print Shop.  Then Jenny Wright took over from Lois and is the present distributor which is a time-consuming job.

I did not realise that I would put in so many hours of work on the journal when I first suggested having one but I have not regretted any of them.  I did it with the strong support of my family and late husband Bill.  If Mum was ‘doing’ the Pivot Tree it had top priority in the house.  I have been very lucky.  I have made many friends through this publication and I will always appreciate the articles, poems, snippets etc. that I gathered over the years from the many subscribers who have made my task easier by handing on family history stories etc. for inclusion in the journal.  I have a stash of files I have not used but will hand them to Pam for her use when she needs them.

I decided last June that I would resign from this task as with my large family [six daughters, nine grand daughters, five grandsons, and three great grand children plus various sons-in-law, partners etc. there is always a large gathering when the family get together and I would like to spend more time with them and my other interests.

I will always remember the friends I have made through meetings, trips, as a guide for tours [bus drivers do not like being directed into streets where big buses are not allowed] through the mail and researching my children’s family histories – I was lucky enough to be given an overseas trip where I saw the villages and cities where their ancestors came from and where I met fellow researchers.

I could use a large number of pages in this issue thanking people individually but I will not do this as the ones that deserve ‘thanks’ know who they are.  It is because of them that this Journal and Group have grown to be of interest to other family historians and I know that Pam Jennings our new ‘editor’ will carry on this journal as well as, if not better than me.

I remember carrying the ‘library’ [swapped newsletters etc.] to the meetings in those striped plastic bags, then having a cupboard in the present meeting room at ‘Karingal’ then we moved meeting rooms and we had a small room as a library where I was often hit by the cupboard door while putting away the ‘journals’.  We graduated to microfiche readers – then a larger library – then the library we are in now.  Since I was one of the ‘original’ members of the Group ‘Family History’ has gone from strength to strength in Geelong.  Thanks to the Members past and present.  SMC.

And today we all owe a huge debt of gratitude to Shirley and her fellow workers.  Shirley, Elaine and Pam have all be made Life Members of the Geelong Family History Group for their extraordinary service to our Group.