Just a reminder to all Geelong Family History Group members and followers – here are two blogs that you really need to read and absorb!

These are both REALLY important:

If you decide to go to the Victorian Archives Centre on Friday 2nd August – or any other time – one of the easiest methods is to catch the train from Geelong to Footscray and then jump on the 402 bus outside Footscray Station – takes you to North Melbourne – a very easy trip!

Make sure you subscribe to both Blogs and keep up-to-date with important information: 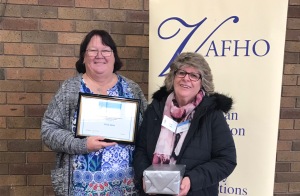 At the VAFHO Expo in Hamilton on Saturday, Susie Zada, from the Geelong Family History Group, was presented with the Association’s Frances Brown Award.

The Award is made by VAFHO to an individual who has made a significant contribution to Family History in Victoria.  The Award is named in recognition of the work of Frances Brown as Genealogy Librarian at the State Library of Victoria, and also in founding VAFHO.

The Geelong Family History Group was pleased to make the nomination in view of Susie’s outstanding contribution to Family History over many years, not only in the Geelong region, but to Victoria generally.  Susie was also nominated by the Genealogical Society of Victoria.

We now have direct contact with senior management at the Victorian Registry of Births, Deaths and Marriages.

To keep abreast of the current and changing status of the Vic BDM website and searches, follow the VAFHO (Victorian Association of Family History Organisations) Blog site at:

Simply search for BDM to locate current and previous blogs on this subject.

Update your diaries for 2019 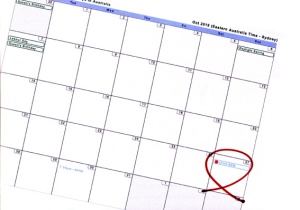 2019 is shaping up to be a great year for family history researchers – both in Geelong and further afield.

Pull out your diaries (and for those relying on their phone or computer diary, open up your diaries) and make sure you’ve got these dates in there – PLAN AHEAD!

Some of the websites may not yet have all the details on the events but:

The more I looked at the latest Emigration records out of the UK from TheGenealogist™ the more useful bits I found – not surprisingly this blog has grown considerably since it was first started but persevere and hopefully you’ll find lots of useful tips and links to help you find that elusive ancestor arriving in Victoria, or other Australian colonies, or other places.  Some are specific to the Geelong region, more are applicable to Victoria, and even more are applicable to anywhere.  And the amount of information and detail can be VERY rewarding.  I’ve added heaps of links to sites that you may find really useful for passengers to ‘here’ as well as things like EOGN – the Newsletter that EVERY researcher should subscribe to!  In some places I’ve also used bitly to create shorter URL addresses – another useful tool!

Firstly – why emigration (leaving a place) instead of immigration (arriving at a place)?  There is a lot of information on various immigration passenger lists – arriving in Victoria, arriving in New South Wales, etc. etc.  Often we just can’t find our ancestors in these lists – lumped in steerage or really bad writing or passenger list missing?  There are many reasons but you might find your ancestors by looking for their DEPARTURE (emigration) records or other obscure records.

This exercise really began with the announcement on Eastman’s Online Genealogy Newsletter™ (EOGN – subscribe to the free edition) about 4 million BT27 (The National Archives UK) Outbound Passenger List Records for the 1950s.

From the Blog for TheGenealogist™ it appears that this release covers the decade of the 1950s.  (Another Blog worth subscribing to / following).  These appear to be a new release of indexed records that complement the range of emigration records from the other major subscription databases.

I confess to being a fan of TheGenealogist™.  A couple of reasons:

Hopefully our Public Libraries will look at a subscription for the Library Edition of TheGenealogist – similar to current access to Ancestry™ and Findmypast™.  All of these databases have Library Editions which give you most but not all options.

The Library Edition option of TheGenealogist™ for the Geelong Family History Group is out of the range of our funds however researchers might consider a trip to the Genealogical Society of Victoria.  If you’re a member, there is no charge, but as a non-member if you do your homework and prepare a Day Pass costs $20.o0 and might be a good option.  At the GSV library in Melbourne you can access Ancestry™, findmypast™, TheGenealogist™, British Newspaper Archive™, MyHeritage™ and ScotlandsPlaces™.

I haven’t been able to confirm the exact number and range records in TheGenealogist™ database however they appear to be similar to the 1890-1960 records which have also been on Ancestry™ and Findmypast™ for about six years.  NONE of these contains a complete range of emigration records – you can select a departure port and then from a couple of years that may be covered.  VERY selective!  You can also search The National Archives (TNA) where some are available for free.  And of course Family Search also has various emigration records.  The bottom line – search them all!

Here are some links worth trying:

Of course emigration records aren’t the only other source for finding out the name of the ship and the date of arrival in a new colony / country.  Try some of these:

And a bit closer to home!  Make sure you check the Geelong and District database which includes relevant records:

You can read more about these Indexes in the Geelong and District database.

Don’t forget that records are added to this database so always check back regularly for your ancestors!

Join us in congratulating our local Geelong and District winners!

Don’t know who they are?  Read this!

See all details in the NFHM Closing ceremony flyer.

There are limited spaces and bookings are ESSENTIAL.

For country groups, why not come to the closing ceremony and then take advantage of family history research assistance from members of the Geelong Family History Group?  Our members will be at the Geelong Heritage Centre every Thursday in August from 1.00 pm to 3.00 pm.  On the day of the closing ceremony there will also be GFHG members in the Heritage Centre to help you until 5.00 pm.

BOOK FOR THIS EVENT 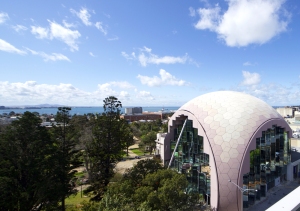 Start your family history journey at the Dome.

New to family history?  Need some help getting started?

During National Family History Month, August, members of the Geelong Family History Group will be available in the Heritage Centre to assist visitors with family history research.

GFHG Members who added their names to the pre-event booking list DO NOT NEED TO REGISTER AGAIN!

Everyone else MUST register – with limited places available, no registration = no entry!

Come and join us for this FREE event – a webinar / online presentation by two DNA gurus – Louise Coakley and Heather Cox – including a Q & A session at the end.