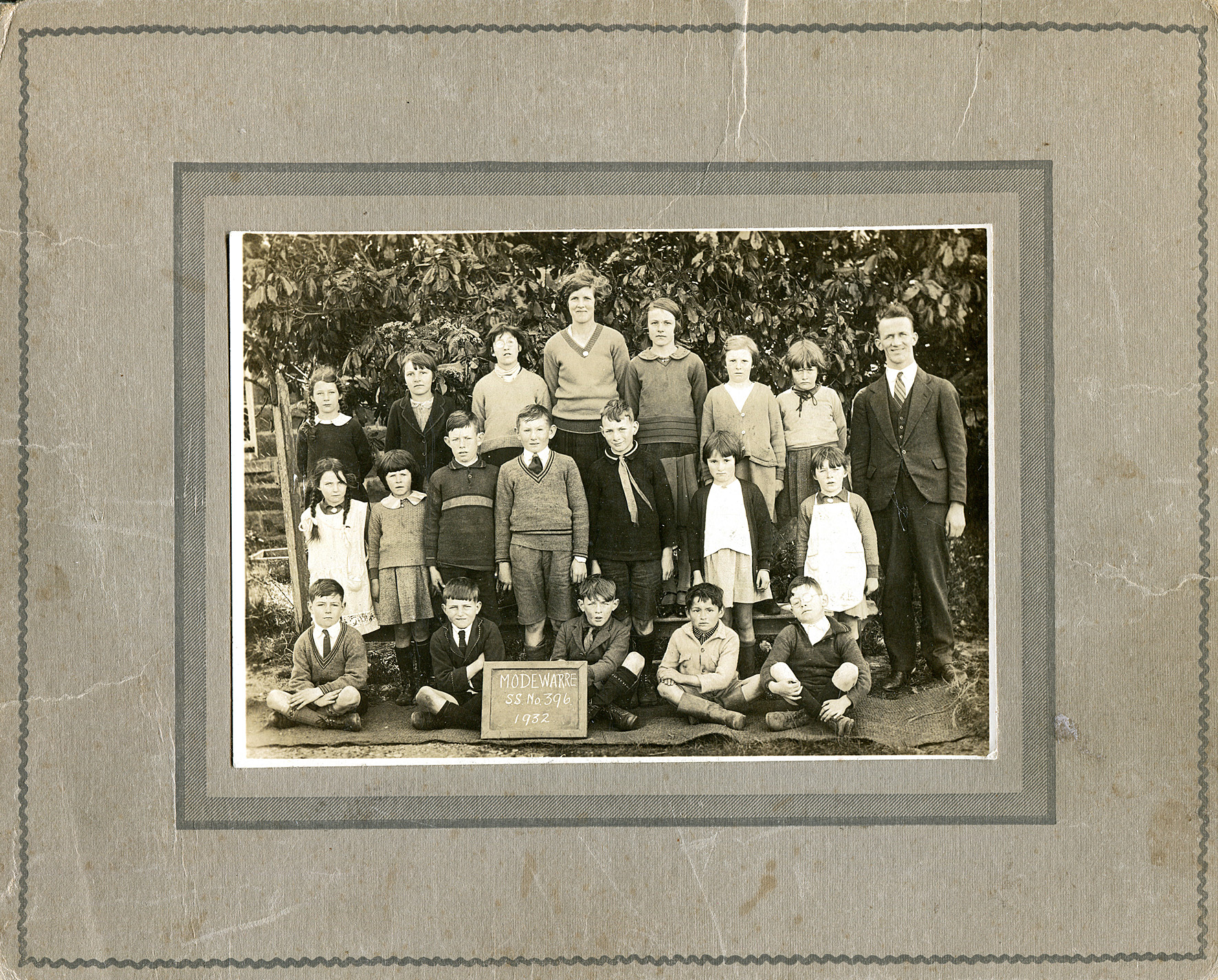 This beautiful Modewarre School photo for the year 1932 was donated to the Geelong Family History Group.  Sadly we only have names of three of the children:

Can you help identify any of the other children or even the teacher in 1932?

About Modewarre State School No. 396

Early records are much confused about the several schools in the Modewarre area, but it appears that from the 1850s schools named Modewarre were scattered within a few miles of the present  village: there was an Anglican School near Layard, a school on Larcomb’s Rd (the Cattle Station School) and another at Lake Modewarre, later moved to Buckley. The surviving School No. 396 seems to be the continuation of the Anglican School.  The Anglican School opened about 1853 with Henry Ridler in charge. In 1858 Mark Halkyard, who till then had been in charge of the Modewarre School on Larcomb’s Rd (No. 406) became HT (Head Teacher) of 396 for about a year.  The school became a vested National School in 1859 which date is celebrated as the foundation date of the present school. Samuel Barber was appointed HT on 11th of July. The origin of the building is not certain but the Geelong Advertiser of 1862 refers to ‘the new common school at Modewarre’. All evidence points to the building being as old as that; it has been used continuously since. A later record shows that by 1868 George Shugg was HT, ‘a Dickensian character who ruled with a rod of iron’. Halkyard was still in the district, as Secretary of the Mechanics Institute. Shugg’s rule lasted into the 1880s. A decade later the HT was C.O. Dentry, still remembered, as is the SM (Sewing Mistress) Emily Smith, who served the school for over thiry years, resigning in 1927. Pupils of that period included Fanny Alford, who as Fanny Brownbill succeeded her husband as MLA for Geelong at the time of the second World War. At a centenary celebration in 1959, two ex-pupils of Shugg’s time were present: Mr H. Piper and Mrs S. Savage. The old building had been renovated and there is a steady enrolment of about a dozen children. Peter Scheuffele took charge in 1969.

The notebooks of Mr Inspector Gilbert Wilson Brown relate to the first years of the 1860s. Brown’s views on the National schools that he visited during 1860-62 give fascinating glimpses of school life. [ … ]

He reported some wild indiscipline. At Modewarre on 29th of March 1860

… a general scramble was in progress. Youngsters galloping up and down … children playing outside … 2 boys fighting … boys rise from their seats and go to the door to see drays to past …

The first school appears to have been No. 396. It was operated by Anglicans in “a miserable hut” where John Cramer, “capable but somewhat foolish”, endeavoured to teach nine children. When Inspector Childers visited the area in April 1851, the inhabitants were erecting a new school, a slab hut, thatched and floored, at a cost of £20. The new school was expected to attract more pupils and by the end of the month there were 28 on the roll. Leter Henry Ridler was in charge and in 1858 Mark Halkyard took over. In this year the handsome new brick schoolhouse designed by Snell and Proiwse was opened by the Archdeacon of Geelong with full services on November 23.

If you have any details, we’d love to hear from you – contact us on geelongfhg@gmail.com