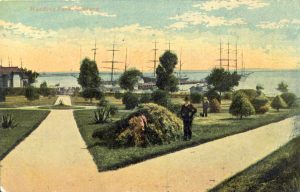 Questions were asked about the naming of Harding Park and Silas HARDING at our GFHG meeting on 28 September 2022 – here are all the answers. [Image source of Harding Park is from the State Library of Victoria La Trobe image collection, FL 16341325 – 1906]

In fact there were a number of sub-questions:

Lets start with the naming of Harding Park.  For any questions about the history or historic places of Geelong I ALWAYS refer to About Corayo: a Thematic History of Geelong by Dr David Rowe.  It contains excellent references to primary and some secondary sources and a great bibliography.  The best part – YOU can download it for free from the City of Greater Geelong website.

I’m not about to paraphrase David’s text to ensure that I include accurate details:

A site at the south-west corner of Bellerine and Brougham Streets, Geelong was permanently reserved for a public park in 1885. [516] The Geelong Town Council, on the resolution of Alderman Price, named the reserve Harding Park in 1890 in honour of Silas Harding as a consequence of him being one of the earliest aldermen of the town and because the town had benefitted from him ‘erecting valuable buildings.’ [517] A secondary motive was the hope that Harding would fund improvements to the park. [518] This did not eventuate until after Harding’s death in 1895 when his widow, Mrs Louisa Harding ‘donated a large sum of money’ for the park’s beautification. She appointed J.M. Anderson, R.E. Oldfield and Charles Naples to supervise its expenditure and procure a design that was carried out under the management of Joseph Nairn, landscape gardener employed at the Eastern Park and Geelong Botanical Gardens. [519] Described as the plague spot that was an eyesore and a menace to the health of persons residing in the vicinity of it, the realised landscape design (Figure 9.62 – is a black and white version of the image above) included a central circular flower bed from which cross footpaths radiated. Rockeries were laid out at the four entrances to the park, the granite having been brought by ships from Rio Janeiro as ballast.

Half moon flower beds were created in the centres of each pathway. Six large plots of grassed areas, perimeter hedging and pepper trees had also been planted. [520] While the park was considered to form a most attraction to the addition to the pleasure enclosures within the town of Geelong, the permanent reservation was revoked under the Land Act 1995 and the site sold under controversial circumstances for private development in 1999. [521]

Endnote 516 refers to the Victorian Government Gazette 6 Feb 1885, p. 532 which in turn refers to 2 Jan 1885.  The best site for accessing and/or downloading Victorian Government Gazettes (including the NSW GGs relevant to Victoria before Port Phillip) is http://www.austlii.edu.au/au/other/vic_gazette/ . These entries refer to ‘Land permanently reserved from sale for Public Parks giving location and the date of the order.

Endnotes 517 and 518 both refer to the Geelong Advertiser 2 December 1890, p. 2.  Of course, the best place to access the Addy is via TROVE – selecting the relevant edition(s).

The Naming of Harding Park

Ald. Price moved the following resolution of which notice had been given: “That the garden reserve situate on the west side of Bellarine-street, north, be henceforth called and known as Harding Park.” He pointed out that Mr Harding was deserving of the recognition by the council, as he had benefited the town by erecting valuable buildings. He was not authorised to say that Mr Harding would help to improve the park, but he had reason for believing that he would do so, as that gentleman had valuyable property abutting on the park. In addition he urged that Mr Harding was a resident of Geelong since 1841, and he was one of the earliest aldermen of the town. [Cr. Connor here took his seat in the council chamber.] Cr Richardson moved and Cr. Connor seconded, an amendment to the effect that the subject be referred to the Gardens committee. A discussion ensued, and the motion was carried by seven votes to three.

At 9.20 p.m. the council adjourned, having completed the business on the notice paper.

Endnote 519 refers to a very detailed description of Harding Park in the Geelong Advertiser 3 Jun 1895, p. 4:

The square piece of reserved land at the north end of Bellerine-street, which has been named Harding Park, has during the past few weeks under-gone quite a transformation. Until recently the square was a most un-sightly block of territory, the deep gully traversing it also having become the receptacle of all kinds of objectionable refuse and rubbish, and in fact the plague spot was an eyesore and a menace to the health of persons residing in the vicinity of it. The excavation was mainly filled up with ballast discharged by the various ships which visited this port towards the close of last year in search of grain cargoes, and the work of levelling the land and furnishing it with soil has been carried out at the expense of Mrs Harding, relict of the late Mr Silas Harding, who liberally donated a large sum of money for that purpose, and appointed Messrs J. M. Anderson and R. E. Oldfield, and the late Mr Chas. Naples, to supervise its expenditure. The formation of the park from designs procured by the gentlemen named has been rapidly undertaken, and under the practical management of Mr Joseph Nairn, a landscape gardener employed at the Eastern Park and Botanical gardens, together with an excellent staff of laborers, the waste land has been fashioned into a pleasing and pleasurable enclosure, although some finishing touches have to be given to the place before it can be handed over to the public. The ground, which was some years since enclosed by a substantial picket fence erected at the cost of the town corporation, has been admirably planned out, and water laid on to four different portions, which in the summer weather will be under the command of a length of garden hose. The cross footpaths lead in direct lines from the gate at the corner of Bellerine and Corio streets to the north-western extremity by the beach, and from Victoria-parade to the south-western corner abutting on Corio-street, whilst there are footways along each side of the square, the whole of the paths being coated with gravel and top-dressed with white shell from the beach off Point Henry. In the centre of the cross footpaths there is a circular flower bed, in which a number of flowering shrubs, etc., have been planted, the designer intending that the circle should be occupied by an ornamental fountain or statuary when funds are placed at the disposal of those entrusted with the care of the reserve. Semi-circular flower beds have been fashioned around the fountain space, all abutting on the cross roads, and in the spring-time, when the plants are blooming, a very pretty effect will no doubt be given. At each of the four inlets to the park there are two nicely shaped rockeries constructed of granite rocks brought by ships from Rio Janeiro as ballast, and the crevices between the layers of rocks are filled with loam containing flowering plants and creepers. In the centre of each footway half-moon flower beds have been laid out and planted with quick growing shrubs and floral specimens, all, however, of stunted growth, so as to avoid causing obstruction to the general view of the ornamental park. There are eight of these half-moon shaped beds in addition to the six large plots in various parts of the park, which are to be laid under English grasses, and in fashioning the beds about 400 loads of rich black loam obtained from near the botanical gardens, have been used in the top dressing of the land. The borderings of the footways have been already formed of buffalo grass, which appears to be thriving, and the inside portions of the park, abutting on the asphalt footpaths along Bellerine and Corio streets and Victoria parade, have been planted with pittosporum bushes, which in time will form a thick and evergreen hedge. The wall of the old blue stone building on the western side of the park is to be lined by rows of pepper trees, which are to he carried half way towards the beach, the remainder of the line of fencing being planted with flowering shrubs. Arrangements have been made for placing a number of seats at each side of the walks through the park, and when the whole of the work has been completed the now ornamental ground in the eastern end of the town should form a most attractive addition to the pleasure enclosures within the town of Geelong. 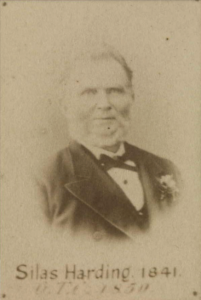 There are a number of HARDING families in Geelong and District.  To date, no connection has been found with these various families although they repeat given names like Robert, Silas and Elias amongst them.  The ‘other’ HARDING families came from Somerset.  The Silas HARDING after whom the park was named was from Devon – a neighbouring county of Somerset.  Perhaps someone would like to do some more research back in England to see if there is a connection, however at this stage, based on beneficiaries of the estates of Silas and his two wives, and the fact there were no children from either marriage, we’ll stick with the ‘local’ family as probably not connected.

The source of the image of Silas HARDING is from our GFHG file – B-LOC-GEE-057 Pioneer Board photos at Geelong Heritage Centre. 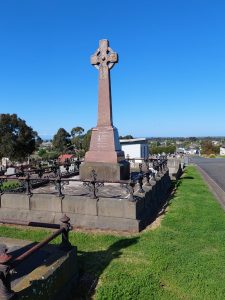 It is not surprising that Silas HARDING’s ‘headstone’ in Geelong Eastern Cemetery is VERY large and dominates the Baptist Section – if you are surprised have a look at the Probate files!

Blessed are they that die in the Lord

Family Group Sheets for Silas and his two wives can be downloaded: